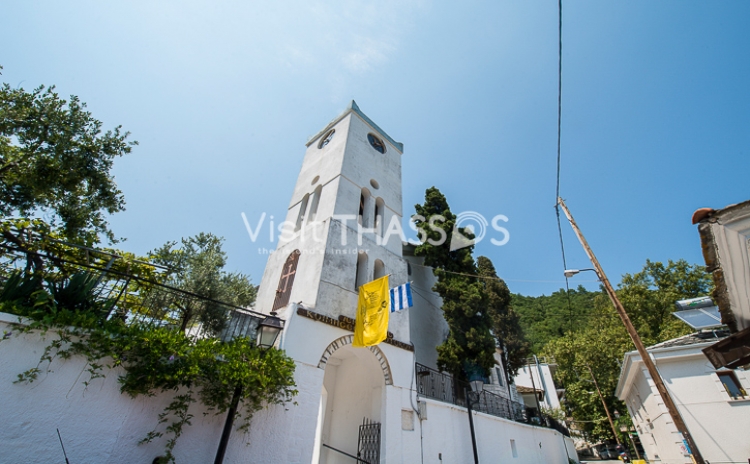 A few words about Church of the Assumption of Mary..

The church of Panagia (Virgin Mary) is an imposing church 18m high dedicated to the Assumption of Virgin Mary.

It is a basilica with dome, with three interior aisles and semi cylindrical domes.  It has five entrances, one central and four on the sides.

Following the tradition, it was inaugurated by the Archibishop Anthimos in the 18th century.  Its construction began in 1831 under the supervision of craftsmen from Kastoria who permeated many characteristics of the byzantine churches of Kastoria into this one.  Funds to allow the construction to begin were given by some of the notables from the village but they then sought financial help from Mount Athos when the funds run out in order to complete the works.  Help came particularly from the monastery of Vatopedi, which was the most robust financially. Thassian marble and marbles from ruins of ancient temples of the island were used for the construction of the church.

Its handmade wooden temple was created by craftsmen from Volos and completed in 1881.  The sacred icons of the church are of particular historical and religious value and are dated from the 14th to the 17th century as well as the icon of “Virgin Mary the Pantovlepoussa” from 1814.

Every year, the church celebrates on the 15th of August and a litany of the icon of Mary and a feast with plenty of food follows (“Klubani”).

Church of the Assumption of Mary
Panagia & Golden Beach

It is a basilica with dome, with three interior aisles and semi cylindrical domes.  It has five entrances, one central and four on the sides.