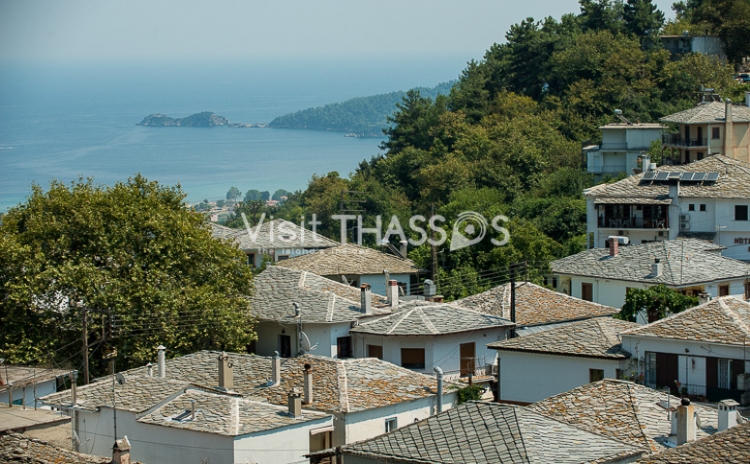 A few words about Panagia..

The traditional mountainous village of Panagia surrounded by lush greenery is situated in the northeastern part of the island and 300m above sea level.

It flourished during the decade that was the island’s capital after 1821, which also had its own currency called ‘bakires’.

Upon visiting Panagia, step into the square with its three springs from where one can wander through the narrow cobbled streets of the village; admire majestic mansions and other lower houses with wooden covered balconies.  A stop at the traditional olive mill ‘Sotirelis’ will give you the opportunity to watch the olive oil production process making use of the water mill, which is perhaps the only one in operation throughout Greece.

Many springs get the water from the mountains to the village through the many artificial channels, which cross the entire village, creating the ideal conditions for romantic walks.

In the centre of the village stands the church of ‘Panagia the Pantovlepousa’, which was built of marbles from various ancient temples of the island.  It is a typical example of basilica with dome, of Byzantine architecture.  Panagia has the greatest number of chapels, more than any other village on the island, illustrating the deep religious faith of the locals, which one can witness during the celebrations on the 15th of August, in honor of the homonymous church.

On Monday of Lent also known as Pure Monday, Ash Monday or Green Monday, a big feast is organised in the streets where visitors and locals participate in the parade on makeshift chariots celebrating carnival in frantic rhythms.

Many tavernas and traditional cafes await you to enjoy your meal or drink under the shade of the plane trees and the sound of running water.  Remember to taste their specialties “souvles” (meat on spit usually lamp or goat) and taste the traditional preserves this place is well known for.

You have got to visit ‘Dracotripa’, a cave close to the village of Panagia with unique underground beauty and impressive stalactites and stalagmites.  It took its name, ‘Dracotripa’, after a stalactite that has formed in the shape of a dragon.

Worth visiting this unspoilt by time village with its breathtaking sea view, the nice cobbled streets and its numerous springs where you can quench your thirst.

The traditional mountainous village of Panagia surrounded by lush greenery is situated in the northeastern part of the island and 300m above sea level.