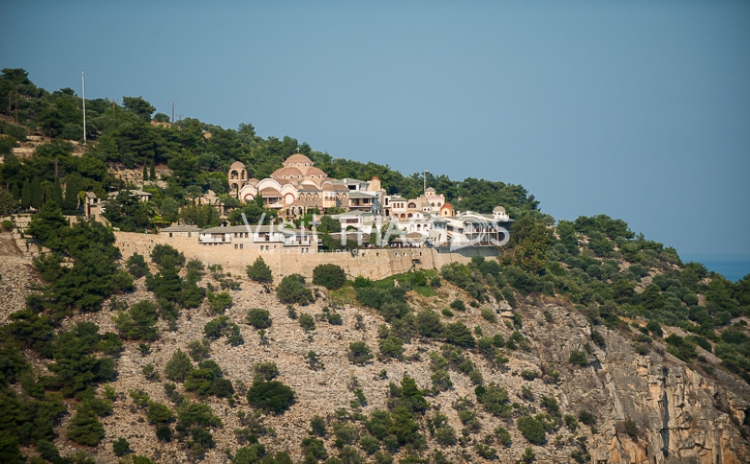 A few words about Monastery of Archangel Michael..

The monastery is located in the southeast area of the island just before Aliki, where the scenery becomes wild, the vegetation diminishes and steep cliffs descend to the sea.  Built at the edge of a cliff with a breathtaking view of the Aegean Sea and Mount Athos (Agion Oros in Greek), it gives the visitor a sense of being suspended.

It is not known when it was founded but it is said that in its place there was a small temple built by hermit Lucas from which flowed the sacred water.  According to tradition, some time ago, heathen Ottomans tried to adulterate it.  They did not succeed and fell dead as the source dried up, in a miraculous way, and started gushing in a cave close to the sea.  It still gushes up at this place.

The first report referring to the year of its foundation is found in a document dated back to 1287. According to the inscription on the western entrance, the building was restored or completed in 1835.

In the monastery complex, there are various buildings such as guest houses, monks’ cells and a large new cruciform in shape temple with dome and arches.  Here is kept the sacred image of Archangel Michael (the cherubs) and a part of “Timios Ilos” that is part of the nails used in Christ’s crucifixion.  Tradition has it that the Saint carried “Timios Ilos” himself, which Byzantine emperor Nikiforos Votaniates dedicated to the Mount Athos monastery “Filotheou”, and that over to “Archangel Michael” monastery.

The uniqueness and the grace of the holy relic has added to the monastery great splendor and attracted many pilgrims.  Michael Archangel is the patron saint of the residents of Theologos and the whole of Thassos.  Celebrated on 8th of November and on “Tuesday of Diakenisimou” (“Week of Diakenisimou” is the week after the Easter holy week).

The historic monastery of “Michael Archangel” operates in a coenobitic way as a feminine hermitage and depends spiritually from the monastery of “Filotheou” of Mount Athos.